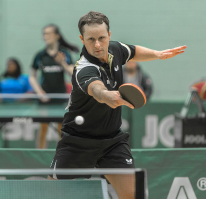 Ryan Jenkins won his 12th Men's title without dropping a single set, whilst Charlotte Carey won back her title she lost last year to Chloe Thomas.

With Chloe unable to attend and defend her crown, it was up to Charlotte not to lose her focus and beat all those put before her, which she did professionally. A final with Beth Roberts was what the crowd got to witness and the 2014 winner never looked back winning 3-0. Carlotte beat the junior champion, Beth Richards in one semi final with Beth beating Kate Roberts in the other half of the draw.

Oyler couldn't scale the heights in the SF losing 0-3 to Jenkins. Callum Evans beat Chris Griffiths in their semi 3/1 to reach yet another final. Ryan was a little too strong for the Tonyrefail youngster, but it may be 3rd time lucky next year.

Callum won both the U21 and U18 singles though, so it was not all bad news for the player who is based in Grantham College during term time. Callum beat Chris Griffiths 3/1 in the final (U21) and Josh Stacey in the U18 final 3/0.

The Men's Doubles was won by father and son combination in Ryan and Jac Jenkins. They beat Chris Griffiths and Callum Evans in the final 3/1. Steve Hall and Neil Wright combined to beat Steve Eades and Mark Simon in the Vets doubles final 3/0. Charlotte Carey teamed with Dan O'Connell to add the National title to the Blackpool GP title they won a few weeks back. They beat Kate Roberts and Mike Marsden 12/10, 11/1, 11/5 in the final. Charlotte teamed up with Catherine Jones for the women's doubles title. After training 1-9 in the 4th set it looked all over but they clawed it back to eventually win it 11/7, 4/11, 7/11, 11/9, 13/15!!!!

The junior Boys doubles was won with a brother combination in Callum and Louie Evans. They beat Lawrence John and Marc Castro in the final 3/2.

Cade Short looked down and out against Benedict Watson but the Bridgend man found a way past in the end to win 3/2 and secure yet another Welsh national cadet championship.

Beth Richards fought hard to secure her first National title beating defending holder Lydia John in the SF and then Lara Whitton in the final 11/8 in the 4th set.

Lara did taste success in the U13 girls event as she won the round robin beating Lauren Stacey in the final game 3/1. 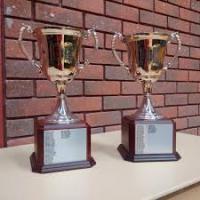